Posted by afreelancewriter on July 12, 2011 in Uncategorized | 3 Comments 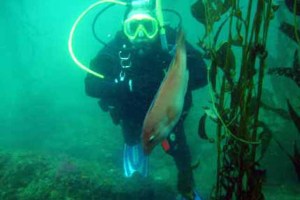 Well, after having a great time finishing up my PADI Open Water Certification in Belize, I invested in some personal diving equipment. I really liked using a particular buoyancy control vest I rented in Central America and know that this brand and model won’t necessarily be available other places because of its comparative cost. I also bought my own regulator system AND a prescription lens upgrade to my dive mask. At my tender age, I require correction for both near and far. All I’ll say about the mask is WOWZEE!

Of course, I had to get it wet! So I signed up for two days, five dives, on the RAPTOR. It’s a dive boat operated out of Ventura Harbor just north of Los Angeles. I give the skipper, the crew, and the boat a double thumbs up for making the weekend a fun experience. I have no problem endorsing them.

Because I was traveling alone, i.e. without a dive buddy, I spent a few bucks and hired a dive guide. That turned out to be a smart move from a few perspectives. Bill R. is a dive instructor and happened to not have a class that weekend. We spent all of the first dive and most of the second adjusting straps and trimming weights and got the new gear set up perfectly.

I finally took my somewhat unsophisticated underwater camera kit along on the third dive. It’s a pretty basic shirt pocket point-and-shoot with fair resolution. The camera fits snugly into a purpose built underwater housing that I had tested on a previous dive. After wandering this way and that through a kelp forest, snapping pictures here and there I came to the realization that I was thoroughly lost. Bill had been following along behind, occasional comparing air pressures (BIG safety item). I turned to him, made a big circle with my hand, pointed in various directions, pointed at myself, turned palms up and gave a big shrug. At that point, Bill merely wiggled a finger for me to follow him and went finning away through the kelp. In less than a minute he had lead me back to the end of the anchor line where we had started.

I probably don’t have to tell you that I let Bill use dive number four teaching me some navigation skills. As has been repeated uncountable times – it’s a whole different world down there. I should point out that I was never in danger or trouble by not knowing where I was. Eventually, I would have surfaced way before I ran out of air and would have seen the boat to swim to. The downside to that is having to swim on the surface to return…, not to mention some minor embarrassment.

Here are some of the 50 or so pix I took. Well, all except one. The bluish creature near the center of the next to last photo is a ‘sunflower’ star. Unlike the usual sea star this one can have as many as 24 legs and is a voracious predator. 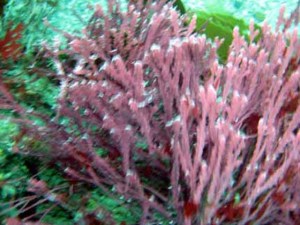 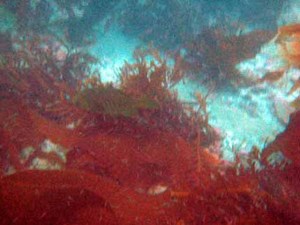