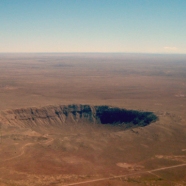 Flightseeing to the Arizona Meteor Crater

Posted by afreelancewriter on October 19, 2015 in Uncategorized | Leave a comment

For almost a week Maurice H. and I watched a cut-off low pressure weather mass that was wandering around in the Pacific down by the border with Mexico in preparing for a cross-country flight into Arizona. This sort of weather phenomena brings lousy weather with it. When it seemed like the weather was headed south and diminishing in intensity, we loaded up the Cessna Sky Hawk and took off.

The flight started October 13, 2015, from Inyokern to the Arizona Meteor Crater west of Winslow, Arizona, with a fuel stop at Kingman, AZ. We orbited the crater a few times for photos then landed at Winslow for food and fuel. Backing up for moment, the flight plan took us over the Ivanpah solar energy plant south of Las Vegas. Very interesting view. A few instances of significant glare from the mirror fields. 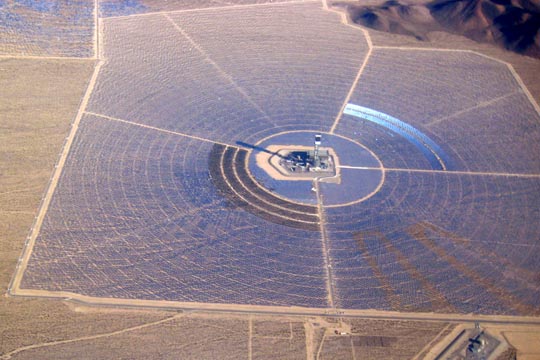 According to Wikipedia, more than 350,000 mirrors are used in the upper picture.

.               The terrain fifty miles from the meteor crater is carved by deep canyons. An emergeny landing landing strip would have been more than hard to find. Fortunately, the Cessna’s engine had just been overhauled and performed flawlessly. 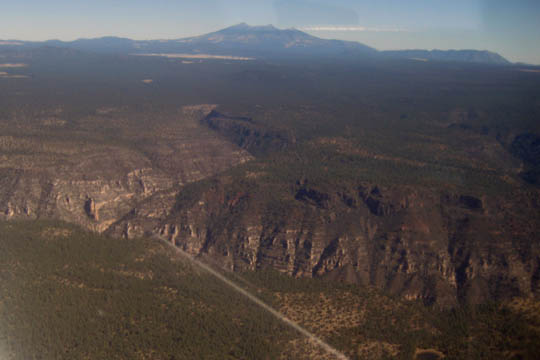 .              The terrain smoothed out twenty or so miles from the meteor crater. We orbited around the crater a couple of times snapping pictures. The crater is privately owned. Prospectors have dug out a few chunks of the meteorite and researchers say most of it was burned up on entry into the atmosphere and that not much more is likely to be found. Speculation says the meteor slammed the Mojave Desert with the force of five Hiroshima atomic bombs.

From Winslow we flew back west to Bullhead City, Arizona, for a planned two-night stop that ended up three because of the weather. We stayed across the river at the Riverside Hotel and Casino in Laughlin, Nevada. Poker was not good to me on this trip and I went in the hole about $140.

Jet Skis on the Colorado River. How did that Palm Tree ever get started there?

My original plan to head for home on Thursday, Oct 15, was thwarted by weather. That cut-off low pressure air mass had headed back north, turned inland and was swamping Arizona, along with southern California and Nevada. The weather went from sunny to yucky. As PIC (Pilot in Command) I elected to layover one more night.

The weather on the 16th was slightly improved with a few thunderstorms and rain showers between us and home. Two routes were possible to get to Inyokern around the restricted flight zones: over the top or around the bottom. The top route plan was a two-hour flight and around the bottom added another thirty minutes. Because the nasty weather was moving north on the weather reports and the southern route looked somewhat clearer, I opted to spend an extra thirty minutes getting home.

We dodged a couple big rain showers on the way and pressure washed the windshield a couple times flying through light precipitation. When we turned north after clearing the Edwards AFB restricted area, the cloud ceilings started getting lower. I had a couple good airports behind me to return to before the lowering ceiling became a hazard — it never did.

I spotted Inyokern Airport from fifteen miles away and made an uneventful landing. Less than thirty minutes after we landed, while we were securing the airplane, a thunderstorm crept up from the south and drenched the airport.