Posted by afreelancewriter on June 22, 2018 in Uncategorized | Leave a comment

According to Britannica.com [https://www.britannica.com/plant/acacia] “…about 160 species of trees and shrubs…” make up the acacia family. Peter, one of Tembo Adventures professional guides, told me sixty different species can be found in Tanzania…., or was that all of Africa. In any case, during our several drives Peter pointed out and named several. I’ve picked three for examples: Bush, Splendid, and Umbrella. These are representatives of the different sizes. 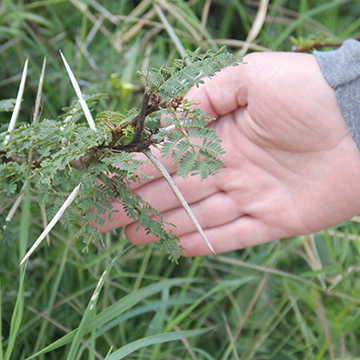 In any case, the acacia defends itself with visually frightening and horrifyingly dangerous spinose structures. The picture above of a bush acacia is a good example. That stiletto-like thorn is more than 3-1/2-inches long and needle-sharp.

Unlike briar patches back in the States, I didn’t see impenetrable thickets of bush acacia, like this one. Sort of a moot point. In any case, I wasn’t going to be wandering around in the bush. This was big-cat country, after all.

Splendid acacia, as you can see, have much less dense foliage. The trunks were as a rule, interesting in form. I asked a couple people but no one seemed to know why it’s ‘splendid.’

Now, on the other hand the ‘umbrella’ acacia pretty well defines its shape.

The acacia thorns are said to be one of the tree’s defenses against predation by animals.

Maybe that works for elephants and other beasts, but somebody forgot to tell the giraffes. With the longest tongue of any other animal in the world the giraffe has developed the skill to pluck their meals from between the stickers.

Well, I said I was going to give three examples of the 60+ species of Acacia. I’m going to hold to that, but I encourage you to Google up some literature on the “Whistling Thorn” acacia tree. This has to be the most unique, if not strangest, Tanzanian acacia of all. Well, in my opinion anyway.