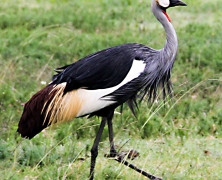 Birds of Ngorongoro and the Serengeti Plains of Tanzania, East Africa.

I’d like to start by giving credit to Raymond Kelso and Diane Foucher of the Pleistocene Society and all the staff of Tembo Adventure and Safari, Ltd., for the enormous amount of work they put into a great photo safari in Tanzania, Africa. Lions, Zebra, Wildebeest, Gazelles, Landscapes, Flowers, Cheetahs, Dung-Beetles, and Birds are just some of […]

September 2017     Along with my son Geoff Wilson and granddaughter Erika Larsen I went for a helicopter ride over the Volcano National Park on the Big Island -Hawai’i. We went with the doors removed from the helicopter so we could have unrestricted views with our cameras. Our flight left Hilo International […]

Flightseeing to the Arizona Meteor Crater

For almost a week Maurice H. and I watched a cut-off low pressure weather mass that was wandering around in the Pacific down by the border with Mexico in preparing for a cross-country flight into Arizona. This sort of weather phenomena brings lousy weather with it. When it seemed like the weather was headed south […]

In this chapter of my blog and perhaps in future posts I’ll credit photos to others, probably mostly to TJ Shembekar one of my fellow adventurers. My Canon 60D camera is unwieldy in a cramped cockpit so I relied on a smaller pocket camera, a Canon 750, for that. Now, if I ever find my […] 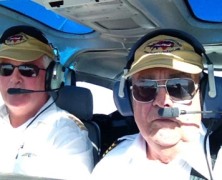 I think a few words about the “Self-Fly” safari are in order before chronicling the adventures we experienced. Note that I am NOT connected with the tour company in any way other than as a customer. Nor did I receive any discount on prices. I’m saying this up front because with only a few very […]